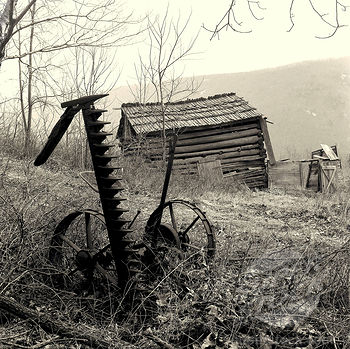 Most of us have experienced theft at some point in our lives. Anger is a normal response, but a sting of betrayal can follow, for thieves take more than material possessions. They take peace of mind and faith in humanity.

Some thieves steal out of need or desperation. Some do it for the thrill. Some thieves are as blunt as a bludgeon. Some are as cunning as a politician. Woody Guthrie said, “As through this world I’ve wandered, I’ve seen lots of funny men; Some will rob you with a six gun, and some with a fountain pen.”

Like most places on Earth, we have our share of theft. The crime rate here in the peaceful valleys of North Georgia is lower than in many parts of the world; lower than many places within our own state.  We have some break-ins and other incidents, but we rarely have to endure anything as dramatic as the nightly shooting report from the city. For this, we are ever grateful.

There is another kind of crime, however, that is not uncommon in our area. It is rarely prosecuted. It is not even considered a crime by some of its well-heeled perpetrators. This crime happens all over the country where there are old farms and old buildings, places that the uninformed or insensitive might consider neglected or abandoned.

The perpetrators of this crime sometimes look just like you and me. They are well mannered and often well-regarded members of our community. Like many of us, they might appreciate quaint old things or enjoy collecting antiques and such. You may even know some of these people yourself, people who do not “need” to steal anything.

Unfortunately they seem to have a misguided notion that it is acceptable to rummage about private properly if that property appears sufficiently remote, neglected, or “abandoned,” as some have said. They seem to believe that stealing from an old farm is “rescue” or “salvage.”

You, dear reader, know better. You know that old houses, old barns and old out-buildings may look abandoned. They may actually be neglected. But this does not mean that they are not cherished. Sometimes here in the country we let our old buildings take their own time returning to the ground. They hold memories, better than any photograph ever could, and there is a quiet kind of dignity in just letting them be.

We know that some people disagree, but if we had a microscope, we would still be unable to locate the slightest interest in a drive-through opinion of what constitutes an “eyesore.”

This does not mean that we don’t appreciate beauty and order. We respect natural order and live according to its rhythms. We believe that what time and nature do to old farms, old buildings, and old people – is beautiful. Nevertheless, we still sigh with sadness at the sagging roof or the cracked window at the place where our grandmother once greeted children with smiles and sweetbread. We miss the carpet of flowers that used to decorate the neighbor’s farmhouse, before his wife passed away and arthritis limited his ability to garden. Some of us wish that the job that kept us on the road so much had given us more time to drive an extra nail or pull more weeds. There are only so many hours in the day, and so many days in a lifetime.

Some of us wish that our backs were straighter, that we still had the strength to mend the old barn where we were mighty in our youth, where our children learned about life and death and where our grandchildren played before they all grew up and moved away. When we look out the window and see someone digging up bulbs from the old “neglected” flower bed, they are digging in our memories.  When they put a shoulder to that closed door, and then carry out something “quaint” and “abandoned,” we are wounded. We feel an anger that would call down lightning, and when that passes, we feel the weight of the years even more.

Now as to the thief who is the subject of this week’s discussion, we must assume you are smart enough to read a newspaper. You were smart enough to earn the money to buy the new SUV you drove. Chances are that you might not even consider yourself a thief, but you are. Be advised: Some of us who love old places still have strong backs,  very likely stronger than yours. We are the ones who put up the posted signs that you chose to disregard and climbed the trees to hang security cameras, in the shadows. You won’t see them. But we will see you.We were reluctant to do all this, but you, and others like you, keep coming, and digging, and taking.

In a quiet, remote grove of an old homestead there is an old log barn that was built a century ago. It is a simple structure, but a family treasure. The roof is kept in good repair. The sills are still sound and the little barn sits high and dry above the ground. You came quite a distance through the woods, thief, to get to that barn. You damaged the frame when you pried off the door. It wasn’t locked.  Maybe you thought that you would take it with you, but it was too heavy to carry. You forced out a beam from the wall, leaving an ugly gap in the side of the barn. Your desire for that “quaint” old beam did not come close to justifying your theft. It was a load bearing beam, and now the entire wall sags. Left unattended the whole structure would soon have fallen to the ground, after all these years.

The wall will be repaired, but a memory of the quality of your character will persist, as well as an electronically preserved image of your face.  Remember those cameras we mentioned earlier? They take remarkable pictures.  Don’t come back.